The original members of our church were natives of Ireland and Scotland with almost all having been members of Presbyterian churches in these countries.

The want of a United Presbyterian Church in Whitinsville led to an earnest desire for an organization.

The first organization of the United Presbyterian Church in Whitinsville was in 1871.  This group worshipped in Smith’s Hall over Duggan’s Livery Stable (located on the corner of Park and Church Streets where Unibank now stands).  The first elders were installed on October 3, 1871.  They were Hugh Young, William Anderson, and William McAllister, Sr.  The group disbanded about 3 years later.

The second organization took place on December 30, 1874 under the authority of a Commission representing the Boston Presbytery.  The first three elders of the church were then duly elected.  They were William McAllister, Sr., Richard Marshall, Sr., and Robert McNeil.  From 1874 to 1882, meetings were held in Chapel Hall on the second floor over the Dudley Store on Douglas Road.  This building stood in front of what is now the Cotton Mill Apartments.  Use of the hall as a place of worship was obtained from C. P. Whitin & Sons, free of charge. 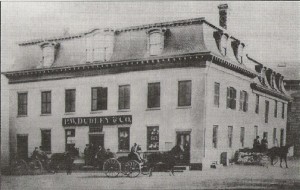 Three years later, on December 28, 1877, the new church was incorporated under Massachusetts law.  Following incorporation, the next concern of the new church was the building of an edifice and selecting a site.  The site chosen was where the present church stands today on Cottage Street.  It was purchased from Cyrus Taft for $500.  Taft was a large landowner in this section of town.  The deed is dated January 24, 1878. 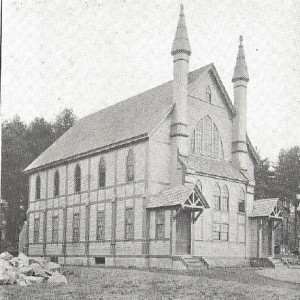 One could take communion only if he or she had attended Preparatory Service during the week before the Communion Sabbath.  A common cup was used to celebrate this sacrament.  Children would often giggle as they saw the mustaches dip into the cup.

In 1886, a new plan had been formulated and pew rentals were assigned by the trustees.  By 1892, all pews were occupied.

In addition to weekly collections and pew rentals, the early church people relied on three major fund raising projects – canvassing the members for pledges, sponsoring lectures given by the minister or visiting ones, and putting on oyster suppers and entertainment.

In 1895, during the pastorate of Dr. Thomas M. Huston, the first church was enlarged and a tower was added. 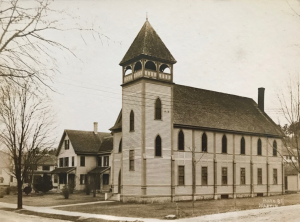 About 1896, a group of families who had arrived in town from Holland, were allowed to hold meetings in the church.  Services were held on Sunday afternoons and it was quite a treat for others to hear these folks sing the Psalms in their own language.  They had the use of the church until they moved to the Great Hall, the second floor of Memorial Hall, a few years later.

In 1901, the first organ was purchased for $700, and boys of the congregation would hand-operate the bellows.  Prior to the organ purchase, a pitch pipe was used by Mr. David Marshall who led the congregation in singing the Psalms.

In 1905, with a growing congregation, it was apparent that a larger church was needed.  A building fund was started in 1906.

March 29, 1914, the last service was held in the church building occupied since 1888.  The building was then torn down to make way for the new church which we enjoy today.

While the present church was being constructed, worship services were held in the Whitinsville Town Hall.

The total cost of the new building was about $50,000, sixty percent of which was paid by the time of dedication and the remainder was quickly wiped out in the next few years.

On October 31, 1935, a farewell party was held for Dr. Huston who had served as pastor for over 42 years.  He returned in 1940 as guest speaker for Rededication services.

Also in 1935, the Kathryn M. Huston Mission Circle was formed, in honor of Dr. Huston’s sister who dedicated her life to the church.

In 1946, a broadcasting system was installed as a memorial to the 98 veterans of our church who served in World War II.

Commencement of the rotary system of elders began in 1951.

In 1955, the sanctuary was completely renovated.

In 1958, the church merger took place and we became the Presbyterian Church (USA).

The residence and office building of Dr. Henry Sullivan on Spring Street were purchased in 1959 for $35,000.  The residence was named “Presbyterian House” and was used for Sunday School classrooms.  By November 1963, the last mortgage payment was made.

Women were first elected to the Session in 1971 and to the Board of Trustees in 1972.

Celebration of the church’s Centennial was held during the week of September 8, 1974 with special services and a banquet.

In 1988, Rudy Gniadek, a local artist and member of our congregation, made a drawing of our church.  It became the cover page of our church bulletin and is still being used today.

The United Presbyterian Church at Whitinsville